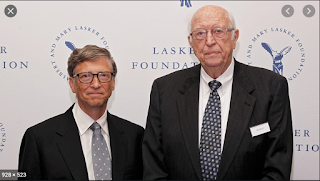 Bill and Bill
Lasker Foundation
Start here:
Virus Mania
Dr Veron Coleman
TAKE ACTION:
Write to your Canadian Premier or your United States Governor.
YOU must Demand this STOP NOW.
NOTE: I specialize in putting together widely available information in unusual ways, connecting the dots to form pictures few people see looking at the same dots. Why? Some of the dots aren't there. Editors have discovered they can reverse meaning by leaving out a few things. People who control the media simply don't tell readers everything they need to know to understand what is going on. Winston Smith, the central character in 1984, was a bureaucrat responsible for rewriting history. "He who controls the past controls the future."
This is crazy! I ask myself questions about this article.
1). Does Gates plan to reduce the world population to 50 million, or is that what someone says Gates plans?
2). Does Gates fund the five power-centres mentioned?
3). Does Gates plan to vaccinate seven billion people with a covid vaccine?
4). Was the world economy shut down on the order of Tedros and WHO in March 2020?
5). Have the protocols of "social distancing" and face masking been adopted worldwide?
6). Does Gates have big plans for humanity? What are they?
7). What is the real Microsoft story?
I think the answer to every question except 1). and 7). unequivocally is YES. As far as 1). goes: Gates has many crazy ideas. He wants to block out the sun. He believes in Global Warming. He would have everyone eating disgusting fake food. For 7). I have an alternative Microsoft creation story to the official MS corporate story.
Posted by Morley Evans at 2:34 PM