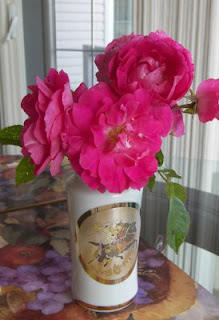 These roses were harvested in our garden yesterday and photographed on the kitchen table.
Posted by Morley Evans at 12:37 PM No comments: 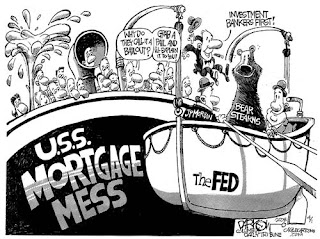 Posted by Morley Evans at 5:24 PM No comments:

© MMVIII (with permission to publish granted by Jennifer Loewenstein)

There are a few interesting thoughts in that piece - but I tend to stay away from theories about "Zionist control" over almost everything. It lets far too many people off the hook for their roles -- roles that were usually very active -- in bringing about and maintaining criminally unjust regimes and policies.

Are we to let people like Dick Cheney, Donald Rumsfeld, Condi Rice, George Bush and the rest of their criminal buddies get away with the hundreds of thousands of murders for which they are directly responsible -- all because "the Zionists control them"? Not in my opinion.

As I'm sure you would agree, the theory of Jewish/Zionist world control - financially, politically, and so on, is a lot of nonsense and fantasy. Individuals have free will and independent minds. They are not somehow magically directed by Jews to do whatever they (the Jews) want. That's the stuff of good, old fashioned anti-semitic hogwash. Worst of all, such theories (of Zionist control) are a gift to the Zionists and Jews who can then turn around and say, "see?!? this is why we need a state of our own; people will never stop hating us and blaming us for the world's problems."

We need to see things for what they are: Zionist power rests on the fact that what Israel wants fits in so well with US national security interests, or that both Israel and the US use each other to further their own goals. How cosy for each, no?

I'm sure you know what I mean.

As for the Palestinians - and God really being on their side, well... I've always believed that God is on the side of the Just, and Just people come in all shapes, sizes, ethnicities, religions, nationalities, etc.

My own opinion is that life for the people of Palestine is getting worse and worse and harder and harder by the day. I don't have much hope for their survival as a national group that will one day have its own state. But I do think that their legacy will continue to educate people as to the horrors of occupations, ethnic cleansings, torture, harassment and so on.

Off to get dinner for the family.

Jennifer
Posted by Morley Evans at 4:01 PM No comments:

DON"T FORGET: Not all Zionists are Jews and not all Jews are Zionists. . .

Palestine is such a depressing subject. But wait, has this occurred to anyone?

Zionists have been waging war on the Palestinians with modern weapons and sophisticated military organization for 130 years. Zionists have had the help and protection of powerful friends in London and Washington all that time. Today, the Israelis have an army, a navy, and an airforce. They have billions of dollars to spend annually. They get it from the United States. Zionists seem to have everyone's sympathy too. The world-wide Zionist-controlled mainstream media (the mind-control system) holds everyone who sees it in thrall. Israeli intelligence operators have infiltrated and subverted Palestinian organizations. What's left of Palestine is being carved up by Israeli settlements, by-pass roads, checkpoints and the separation wall. Gaza has been imprisoned by military siege. The Zionist atheist-materialist ideology managed to take over Judaism and penetrate Christianity in the 20th century. Zionists seem to have an unlimited supply of everything. Even the Palestinians' wealthy Arab cousins are so bedevilled by their enemies they can offer little help. God is claimed to have given Palestine to His chosen people. It's in the Bible, Zionists say.

Palestinians have nothing but a few futile home-made rockets and the occasional "suicide bomber": Though dispossessed, imprisoned, humiliated, starved, detained, tortured, beaten and killed, the Palestinian people continue to survive, supported by their faith in the one true God.

According to Israeli leaders, the Palestinian population continues to increase and threatens one day soon to swamp their Jewish State. According to the CIA World Factbook, Palestine and its people do not exist, at all.

Whose side do you think God is on?

It has occurred to me that military stuff has become worthless. Consider that the U.S.A. and it's allies (that's us) have not won a war since 1945. Why not? We have always enjoyed wide margins of technological and material superiority and still do. Today, many in the Pentagon consider the current war on Iraq was irretrievably lost years ago. The once-invincible U.S. dollar is going down the drain. Nothing is stopping it: Bear Stearns went down in March; last week it was Fanny Mae and Freddie Mac; yesterday it was Lehman Brothers; today, it's Merrill Lynch. The Chinese hold a mountain of U.S. debt. The Japanese hold at least as much.

"They shall beat their swords into ploughshares, their spears into pruning hooks; nation shall not lift sword against nation; and there shall be no more training for war." - Isaiah 2:4

When the means is gone, they will be forced to do it, even those who love war.
Posted by Morley Evans at 10:12 AM No comments: 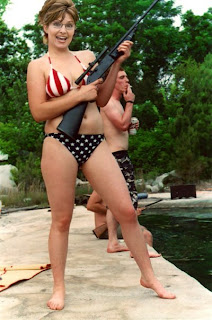 "What's the difference between a hockey mom and a pit bull? Lipstick."
- Sarah Palin, GOP acceptance speech September 2008
Sigh. After Dick Cheney, what's the difference? A pit bull or Palin?
Posted by Morley Evans at 6:25 PM No comments:

Buzz Hargrove has resigned as President of the Canadian Auto Workers. He is hailed as a great labour leader and a friend to the working family. But is Buzz really their friend? The former Big Three, General Motors, Ford and Chrysler, are now the "Detroit Three". GM and Ford have been pushed aside in their home markets by carmakers from Japan and Korea as consumers desert former brand choices and go for something new. Chrysler may soon disappear altogether. Even powerhouse Daimler-Benz was unable to turn Chrysler around. A main reason for the decline of domestic automakers is "organized labour" which has made them uncompetitive. If workers no longer have jobs because their companies have been driven out of business by "organized labour", how can anyone say Buzz was their friend? Only government unions like CUPE (Canadian Union of Public Employees) can keep getting more for their members. Why? Governments tax and spend. Taxpayers pay up, or else.
http://www.newswire.ca/en/releases/archive/September2008/01/c8437.html
Posted by Morley Evans at 6:39 PM No comments: