Peace Is Their Profession


The beleaguered Palestinians are close to extermination. The so-called State of "Israel" tightened the noose around their necks while the U.S. Secretary of State, Hillary Clinton, pranced before her masters at the AIPAC convention in Washington this week acting like the trained dog she is. "Good FIDO." "ARF!" We can be reconciled with this idiocy by this: Evil exists so it can be resisted. We are here to choose between good and evil. Life is a test. We are here to stand up for what is right. Please support KinderUSA. Please help children in Gaza. www.kinderusa.org 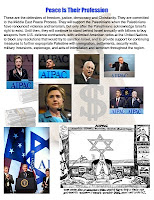 Posted by Morley Evans at 11:59 AM No comments:


“It is perfectly possible for a man to be out of prison and yet not free – to be under no physical constraint and yet to be a psychological captive, compelled to think, feel and act as the representative of the National state, or of some private interest within the nation wants him to think, feel and act…. The nature of psychological compulsion is such that those who act under constraint remain under the impression that they are acting on their own initiative. The victim of manipulation does not know that he is a victim. To him, the walls of his prison are invisible, and he believes himself to be free. That he is not free is apparent only to other people. ”
- Aldous Huxley.

People should entertain the possibility that everything they have been told, and that they believe, is a lie. When one begins to examine the history of the recent past, the Twentieth Century, one begins first to see cracks in the edifice of official history — the history of the victors. Eventually the edifice will collapse and one will see a reality which not only is different, but which is the opposite of the story that has been told over and over by accomplished liars, their leaders. Seers and prophets must not expect most to believe what they say or even understand what they say. They should not be dismayed. They should continue speaking. Many eventually will understand. Some will never understand.

John 4:44
(Now Jesus himself had pointed out that a prophet has no honor in his own country.)
Posted by Morley Evans at 9:45 AM No comments:

What was Bertie thinking?
http://www.MorleyEvans2.com/Sovereignty/Place.html
Posted by Morley Evans at 7:20 PM No comments:

Unraveling complex problems often takes a long time, but not always. The problems I solve may not be the problems you want solved and you may not like the solutions. I stand behind my work. I seek to find and correct my own errors. I listen to others and care about their feelings and what they think. That may not change things because the truth is the truth.
Posted by Morley Evans at 3:43 PM No comments:

2010 is the centennial of St. Matthew's Anglican Street in Regina. This is our brochure.

Come to church. Bring a friend.
Posted by Morley Evans at 6:27 AM No comments:

While some Canadians bask in the afterglow of the Olympic victories in Vancouver and they congratulate themselves on Canadian greatness, I have misgivings. The Prime Minister is going to spend billions more on élite athletes to insure Canada wins more Olympic medals so our greatness can be reaffirmed in future Olympics. It is more "bread and circuses" for the chumps.

Why doesn't the Prime Minister do something about the deplorable Canadian medical system? He is doing that, you say? Oh right, he's going to pour billions more down the medical rat hole to continue feeding its inhabitants. They are some of Canada's fattest rodents. They do resemble beavers, Canada's national rodent, so why not? Here's why not:

Canadian doctors have enjoyed blind public admiration and trust for a century. But that was not enough for the Canadian Medical Association. Based on a premise which arrogates the law to itself, organized medicine in Canada (the CMA and its creature the CMPA) sought to "protect" physicians from the law. Canadian medicine uses every excuse in the book to cover up its failures. It has its hand in the public pocket. It writes laws to protect itself. Records are lost. Its members lie. Patients are tortured, maimed and killed. It feeds the public with incessant propaganda. It works hand-in-glove with the pharmaceutical industry with its increasingly dangerous nostrums. The Canadian medical system is a scandal and its days are numbered. The Canadian medical system is the medical paradigm which emerged and took over at the end of the 19th century. Established medicine has taken decades to grow into the monster we see today. To Hell with them. Something better — medicine that works and puts patients first — is emerging at the dawn of the 21st century.

Canadian greatness lies in a different direction than the one in which Canada has been headed. Greatness embraces every Canadian — just as advertised — not merely the small self-satisfied Canadian élite which is fed by government at everyone else's expense.
Posted by Morley Evans at 6:41 AM No comments: