Venezuela is in the news. What is really going on? You won't know if you watch the "mainstream media" (all the TV news and all the Newspapers). You need to watch the black media on the World Wide Web. That is where you will find the truth. If you look, you'll even find out who killed JFK, RFK, and MLK. It wasn't Castro or the Soviets.

The "mainstream media" is a propaganda organ of the AMERICAN DEEP STATE which is the American military — the Pentagon — and all the military contractors; the CIA, the NSA, the FBI, and the American "intelligence community"; shadowy people you have never heard of; the American über-wealthy 1%; the people who lead the Republican and Democratic parties; the universities and libraries; and political operatives like Elliot Abrams, William Kristol, and John Bolton who are agents of the devil himself. If they provide you with your information, EVERYTHING YOU BELIEVE IS WRONG. THEY LIE. So, wake up.

Who is Nicholas Maduro "the evil dictator" of Venezuela? Who is Juan Guano the leader of the "opposition" in Venezuela? Find out here.


Nicholas Maduro is the Spanish-speaking equivalent of Mullah Omar, Sadaam Husein, Muammar Gaddafi, and Bashar al-Assad. Who were (or still are) all "evil dictators who killed their own people."

What could be worse? Honest Abe fits that mould. Ask any Confederate. Lincoln was saving the Union or "freeing the slaves." Bibi fits the mould too. Netanyahu is fighting "anti-Semitism".

This is the position of The Organization of American States.

Do these organizations have opinions that conform to the wishes of the most powerful member, the USA?

The Monroe Doctrine claims North and South America as the backyard of the United States of America. Washington's policies over the years have earned Americans the pejorative "Gringo" everywhere but Canada. "Yankee Go Home" or "Yankee ve a casa" is the common chant south of the Rio Grande where everyone knows the source of their problems.

These are some of the Government Mass Surveillance Agencies that are watching YOU. Do you feel better now? You are not paranoid. This is really happening.

Posted by Morley Evans at 6:32 AM No comments:


"Poor Mexico. So far from God. So close to the United States." - Porfirio Díaz

This statement by Porfirio Diaz contains truth, but Diaz himself was a mixture of good and bad like everyone, Americans and Canadians included. Read the first paragraph about Porfirio Diaz here.

Posted by Morley Evans at 10:21 AM No comments:

This compilation of Saskatchewan's annual budgets disproves everything with which the NDP and the Progressive Conservative Parties were obsessed. They hated it and me. 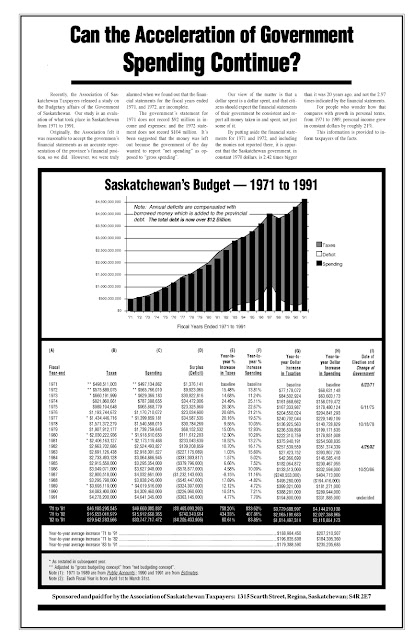 THE GRAPH TELLS THE STORY. The numbers are data taken from the Public Accounts published each year by the Government of Saskatchewan. They were checked and double-checked. The graph indicates that the spending was low when the New Democratic Party assumed power and that the Budgets were balanced. When the Progressive Conservative Party was elected, spending increased year-by-year at the same rate as it had during the NDP years. The Grant Devine PC government started borrowing to maintain the increases. Towards the end of its first term, the PC government began reducing its borrowing. The white area in the graph is debt. Taxes were increased to compensate. Spending continued increasing year-by-year. Subsequent Public Accounts no longer make it possible to create such a diagram. Obfuscation to hide the record is the name of the game.

Political parties always believe they are better managers of the affairs of state than their opponents. In Saskatchewan, the NDP (formerly the CCF) believe in government ownership and bureaucracy to manage everything the government owns. If that sounds like Marxism-Leninism, that is what it is. The Liberal Party and Saskatchewan Party (formerly the Progressive Conservative Party) believe in "private enterprise" and individual ownership as they understand it. They don't.

The NDP pointed out that spending was low and there was no debt when Allan Blakeney started in 1971. That was true. They began with the fiscal house left in good order by Ross Thatcher and his Liberal government. The NDP immediately began spending more. Spending is popular; taxation and debt are unpopular. The PC governments continued the spending trend, borrowing to do it. The NDP screamed about service reductions and later about "privatization" when the PCs tried that.

Screaming and shouting embroiled the people of Saskatchewan for decades following the CCF victory in 1944. Tommy Douglas held onto power with an iron fist. Hatred was fierce. This civil war ended in 1991 when people had finally had enough. Things are quieter today, but the rift is deep. No one wants to open old wounds. However, Medicare looms. It will be dealt with one way or the other like it or not.

Can the acceleration of government spending continue? Who knows? I'm exasperated by politicians, myself.
Posted by Morley Evans at 3:07 PM No comments:

In this essay, Gilbert Doctorow echoes others when he suggests that Vladimir Putin is too moderate. Stalin terrified the West. They knew the U.S.S.R. had defeated Nazi Germany. Khrushchev shouted "We Will Bury You!" as he pounded his shoe on the desk at the United Nations, Brezhnev continued to build the Soviet forces, Alexei Kosygin quietly told a smirking LBJ "If you want war, you'll get war." (The Soviets knew who killed JFK and it wasn't Castro or them.)

The Soviet leaders did not dissuade the military-industrial complex of the West led by the United States. They reinforced its arguments that more money $$$ was needed to "defend" the West. "Peace is our Profession" really was the motto of the Strategic Air Command that was organised to kill hundreds of millions of red vermin (people Washington didn't like). Citizens of the West were scared by constant anti-war songs on the radio, scary novels and movies like "Dr Strangelove" and "On the Beach". The CIA, the Democratic Party, and the Pentagon managed to put everyone to sleep after they had blamed everything on Nixon. Doctorow is correct.


The people of the West need to be awakened. Pronto. Time is on Putin's side. The U.S. empire is collapsing. Its days are numbered. Putin may be pursuing the best strategy to bring about world peace: Avoid conflict and wait. When the U.S. dollar is gone, the U.S.A. will be gone. We may not be that lucky. The choice we have is either Washington and annihilation or the World and freedom.


Vladimir Putin to the West: ‘We Will Bury You!’
by Gilbert Doctorow Posted on February 02, 2019

I have given this essay a “fake news” title for a good reason: to direct your attention to the fact that the incumbent President of Russia is too gentle for his and our good. He does not make threats the way his predecessor, the party boss of the Soviet Union did in 1956. He does not bang his shoe on the desk in front of him while speaking to the General Assembly of the United Nations as Nikita Khrushchev also did. Thus, we Europeans and Americans are oblivious to the dangers of a hot war with Russia that we risk by pursuing our present-day foreign policy of driving Russia into a corner. War could not be further from our minds, since, we tell ourselves, no one wants war.

Because of his behavior cited above, because of the launching of the first Sputnik during his time in office and the invasion of Soviet forces in Hungary for purposes of regime change, because of the atmospheric tests of the vastly powerful hydrogen bombs that his country was producing to wage war on us, Khrushchev made a strong impression on the broad public and also on the political classes in the West as a person who was aggressive, impolite and at the head of a dangerous country.

Only six months of winter left!
Enjoy it while you can!

Here is the story of Punxsutawney Phil the rodent in Pennsylvania. If you want you can stay indoors and ponder this important question:

How much wood could a woodchuck chuck if a woodchuck could chuck wood? You can also figure out how to pronounce "Punxsutawney".

You will notice, please, that the grass behind Gainer is green. It may be fake grass but there is no snow, not even fake snow. So, what planet is Gainer on?

Posted by Morley Evans at 6:34 AM No comments: